ASEAN at 50: Thailand Must Do More 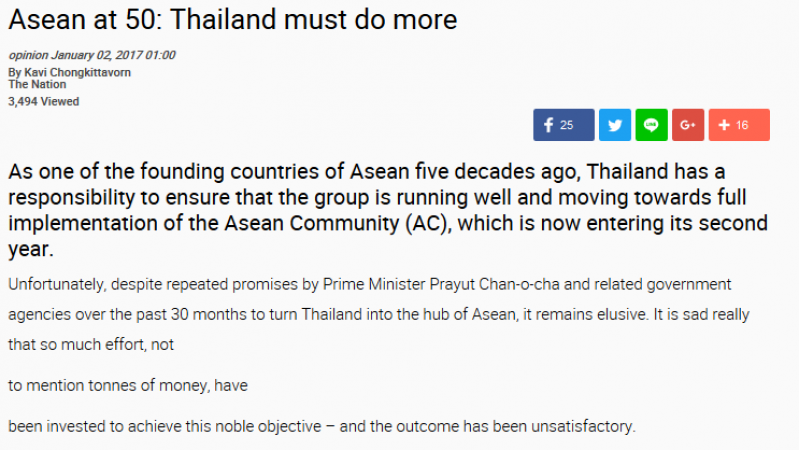 As one of the founding countries of Asean five decades ago, Thailand has a responsibility to ensure that the group is running well and moving towards full implementation of the Asean Community (AC), which is now entering its second year.

Unfortunately, despite repeated promises by Prime Minister Prayut Chan-o-cha and related government agencies over the past 30 months to turn Thailand into the hub of Asean, it remains elusive. It is sad really that so much effort, not to mention tonnes of money, have been invested to achieve this noble objective – and the outcome has been unsatisfactory.

First of all, Thai people still do not have a strong sense of belonging to Asean. They continue to wonder what concrete benefits or opportunities they would get from their integration with neighbouring countries. Worse still, Thai policy-makers often come out with conflicting reports on the pros and cons of community-building in Asean. So, there is a high sense of ambivalence.

Since 2011, various Thai governments spent between Bt8-9 billion all up to promote awareness and understanding among people to prepare them for the arrival of the AC at the end of 2015. During the Yingluck government, the Asean aware-ness campaign reached its peak with every district (tambon) and village (mooban) coming out with its own projects to promote the AEC—the familiar acronym for the Asean Economic Community.

At the time, funding was easily available as part of the populist policy, for any Asean-related project from rural areas. Furthermore, over 120,000 government officials from 76 provinces have attended at least one training session related to Asean. School children were encouraged to engage in Asean-related activities such as singing Asean songs, dressing in Asean national costumes, taking part in Asean quiz competitions, among others. But most of these activities came to an immediate halt when funding stopped.

To be fair, in the past two years, several prominent projects were completed and sustainable — the Asean Cultural Centre in Bangkok, the Asean Centre for Military Medicine, the Asean Narcotics Cooperation Centre and the Asean Library Project, in selective schools.

From now on, the country needs long-term strategies to embed knowledge and a sense of belonging to Asean for all Thai citizens. After all, Thailand has a long history of supporting a people-centred Asean. It was the first Asean member to initiate the idea of an Asean People’s Assembly back in 1995.

However, the idea did not fly, as other Asean partners were not ready for such an inclusive process. Later on, the idea morphed into an interface between the representatives of the Asean leaders and non-government organisations. As Asean turns 50, the government must make sure the Thai people are on the same page on the integration of the AC — to prevent any occurrence of anti-Asean sentiment.

Second, the lack of coordination among government agencies and synergy of overlapping polices is still the biggest obstacle in implementing various action plans enshrined in the Asean Vision 2025. Due to bureaucratic red tape, these agencies have been unable to integrate their programmes and activities.

To implement certain action plans related to counter-terrorism in the Asean Political and Security Community, it would require coordination of 22 government agencies. In the case of economic matters, it would require 20 government agencies – and for social and cultural policies, cooperation from 13 agencies. Today, most still carry out action plans on their own without cross-cutting approaches.

For instance, in the area of intra-Asean trade promotion, Thailand is still far behind other Asean member countries in eliminating non-tariff measures (NTMs). According to the latest data-base from the Economic Research Institute of Asean and East Asia/UNCTAD, Thailand has a total of 1630 NTMs, the highest in Asean with 48 per cent related to sanitary and 34 per cent to technical barriers to trade. Truth be told, these NTMs could easily be eliminated if concerned authorities from the Ministry of Commerce, Ministry of Health, Ministry of Science and Technology, agreed to sit down and find ways to reduce them.

Of late, Thailand has set national economic growth towards the so-called 4.0 path, which means a seamless digitalised economy backed by innovation. It is easier said than done.

In reality, Thailand still lags behind Singapore and Malaysia in industrial innovation and development, in particular e-commerce, due to the constant hiccups of implementing IT policies, as well as slow enactment of laws linked to e-commerce, and controversial cyber-security measures.

Finally, looking beyond Asean at 50, Thailand is preparing for the chairmanship in 2019. The Ministry of Foreign Affairs’ Asean Department has already prepared a series of meetings and consultations with all stakeholders to ensure better coordination and synergy to implement their programmes under the Asean three pillars. Given the current situation, Government House’s leadership is still needed to guarantee compliance and an uninterrupted way forward.